Was Egypt, in fact, a less exploitive state in any realm apart from the politically correct imagination? Can it be said without nuance or qualification that the Roman generals of the late Republic were opposed to the landed aristocracy? Miller is on firmer ground when he turns to the development of the Atlantic slave trade and America's 'peculiar institution. Walter Scheidel calls upon a number of theories and models in order to explain both how slave labour was distributed in slaveholding economies and why chattel slavery was more or less prevalent in different times and places in the ancient Mediterranean in "The comparative economics of slavery in the Greco-Roman world.

A reward for good service in terms of manumission is most likely and desirable in an 'open' slave system, in which former slaves can readily enter the slaveholding society, as opposed to 'closed' systems, in which some cultural factor such as race prevents former slaves from rising above their dependant or disadvantaged station. Scheidel suggests that these factors of incentives and social openness may be combined in a comparative model. He also notes that the unavailability or high cost of free labour could also be an inducement to slave acquisition. In the New World a combination of abundant natural resources and a scarcity of manpower certainly led to a dependence on slaves.

But what of the ancient Mediterranean? Sheidel proposes that the increasing political, judicial, and especially military commitments of citizens in expanding city-states with growing capital resources and escalating demands on free labour explain the recourse to large-scale slavery in fifth-century Athens and late Republican Rome. Tracey Rihll's "Slavery and technology in pre-industrial contexts" is a furiously fast-paced and frenetic survey of technological innovation in the Greco-Roman world, and it only sporadically touches on the relation of technology to slavery.

The comparative approach espoused at the beginning is also in rather infrequent evidence. She draws three main conclusions. The fact that some slaves received some pay for their output and the prospect of buying one's freedom with these earnings meant that slavery and technical progress were not antithetical.

Nevertheless, she claims technical advances in antiquity were numerous but unimportant. And "slavery was perhaps the main agent of technology transfer" across linguistic, cultural, and national boundaries although Rihll admits she cannot prove this last point.


Michael Zeuske presents a dense and involved examination of the history and practicability of comparisons between the various slave systems from Virginia to Brazil in his "Comparing or interlinking? Economic comparisons of early nineteenth-century slave systems in the Americas in historical perspective. There seems to be little potential for the application of Zeuske's work to the study of ancient slavery, particularly as he repeatedly insists on the introduction of the slaves as participants and their perspective in any comparative study. Nevertheless, the rigorous qualifications and conditions that Zeuske imposes on comparisons within what might be seen as a single 'slave culture' offer useful cautions to anyone who would attempt comparisons across great spans of time and space.

The editors' own contribution, "Ideal models of slave management in the Roman world and the ante-bellum American South," a collaboration like the volume as a whole, is a comparison of the manuals of advice offered to Roman estate holders and Southern planters. Dal Lago and Katsari say they will pursue a method of 'rigorous comparison' and take the contexts of the respective comparanda into account, but there is not much in their essay beyond a survey of the contents of agronomical handbooks.

They discover a number of intriguing parallels in everything from specific instructions on housing slaves and the appropriate use of the lash to the ideological tenets of benevolence, paternalism, and reciprocity, but they treat these parallels as independent responses to similar situations, and explicitly refuse to pursue the possibility that Southern slaveholders were directly influenced by Roman writers.

This is unwarranted, given that the planter aristocracy of the South was well versed in the Classics and lived in a culture which sought to find models for conduct and civilization in antiquity. It is particularly baffling in light of the next chapter. These men, as the authors indicate, wrote at a time of crisis: crisis in the markets for Brazilian sugar and African slaves, and crisis in the status of the Jesuits in Portugal's colonies.

As a riposte to certain criticisms of Jesuit abuses, Benci and Antonil prepared their treatises as an attempt to synthesize Greek economics, Roman agronomics, and Biblical patriarchy in order to set up an ideal of the Christian household in which the master bore the full weight of his obligations.

6 editions of this work

Their ideal had little time to establish itself before it was successfully challenged by a more individualistic and capitalistic model which emphasized production and profit rather than responsibility. Olivier Petre-Grenouilleau's "Processes of exiting the slave systems: a typology" an essay which might have benefited from much more extensive editorial attention attempts an unrestricted survey and classification of the routes by which people left the state of slavery.

Petre-Grenouilleau identifies three basic types of 'exit. Manumission at the will of the master here the word 'enfranchisement' is rather confusingly used in the sense of the French 'affranchissement' is presented as most common, but also as a different kind of dependence, rather than real freedom. Petre-Grenouilleau also includes in this type slave revolts, because they bolster the slave system by obviating the need for change and siphoning off the least tractable slaves.

The second type is an "evolution of global society, entailing a slow 'decline' of the slave system.

He concludes that abolition combined with the evolution of global society, his third type, is the only means of not simply offering freedom to slaves, but ending a slave system. If some of the papers in this collection insist upon a rigorous and detailed comparison of different slave systems, Stanley Engerman's "Emancipation schemes: different ways of ending slavery" demonstrates a very different approach in which the topic serves to attract a diffuse number of facts and figures, dates and events, but limited analysis and insight.

There is, moreover, a disconcerting and superfluous importation of modern value judgments into an historical discussion, which is otherwise absent from the collection as a whole. Widespread emancipation was by no means frequent in antiquity, and so it is perhaps fair that the Romans receive barely a mention alongside the mediaeval Scandinavians. It [End Page 75] appears that slaves everywhere had to pay for their freedom, whether individually by purchase or collectively by paying taxes to reimburse their former owners for the loss of slave property.

Hodkinson's analysis of Spartan helots, which closes the volume, returns to the intent of the volume by recognizing the variety of instances throughout history in which workers have been at a severe disadvantage in bargaining with their masters and employers. This volume will interest students of slavery in both the ancient and modern world, although the chapters offer less insight about the differences between ancient and modern slavery than might be hoped. The chapters by Hodkinson and Scheidel are the standouts. Robert J. Project MUSE promotes the creation and dissemination of essential humanities and social science resources through collaboration with libraries, publishers, and scholars worldwide.

Forged from a partnership between a university press and a library, Project MUSE is a trusted part of the academic and scholarly community it serves. Built on the Johns Hopkins University Campus.

In lieu of an abstract, here is a brief excerpt of the content: Reviewed by:. Slave Systems, Ancient and Modern. 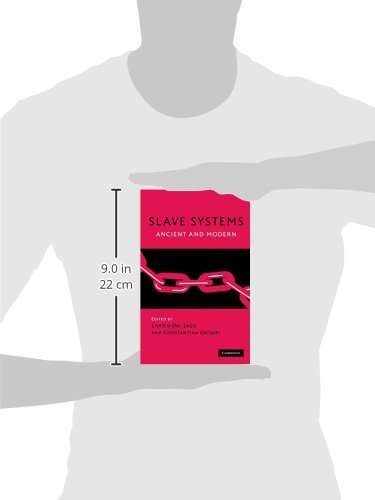 The editors' summary of the issues and chapters in this book adopts an interdisciplinary approach and discusses a wide variety of authors, but it omits one important discipline, economics. Peter Temin. Footnotes 1. If you would like to authenticate using a different subscribed institution that supports Shibboleth authentication or have your own login and password to Project MUSE. 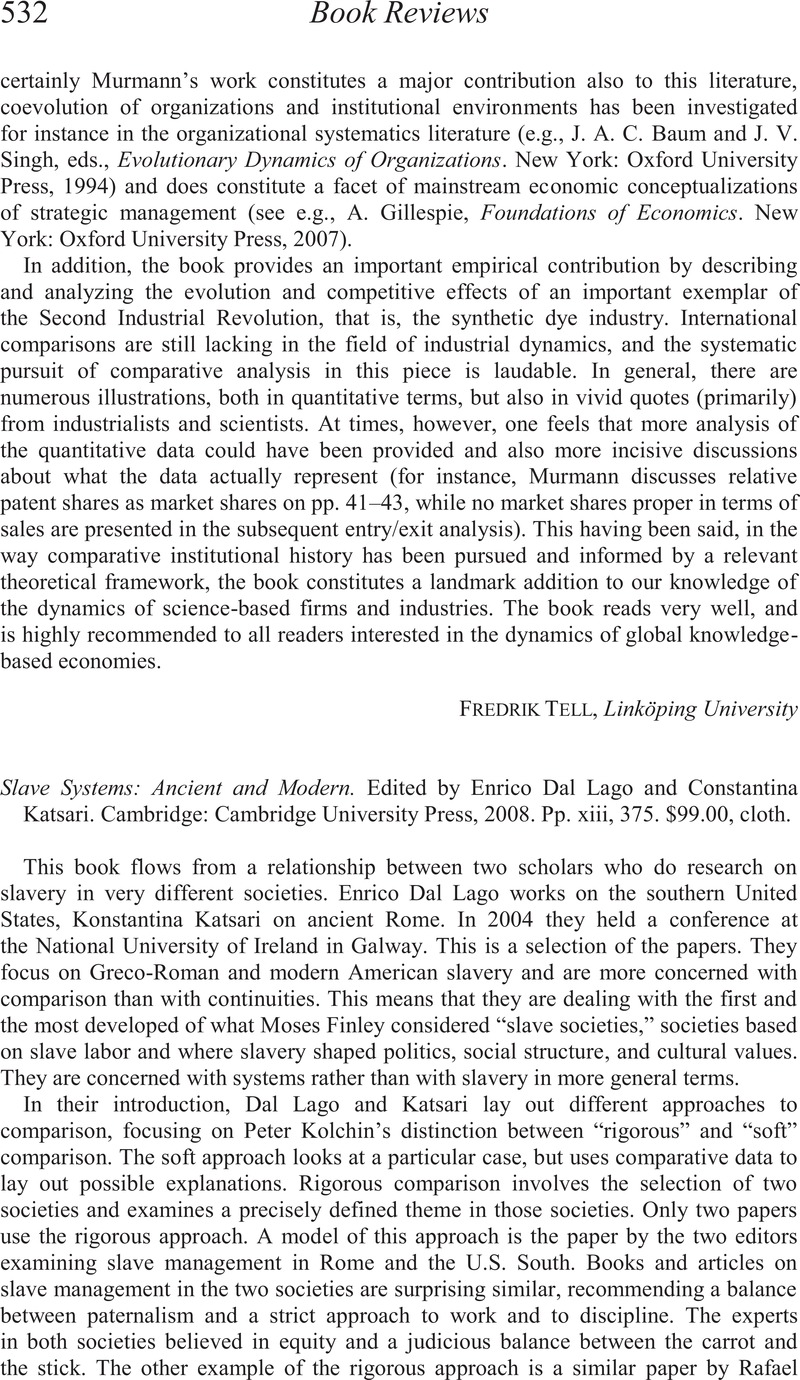 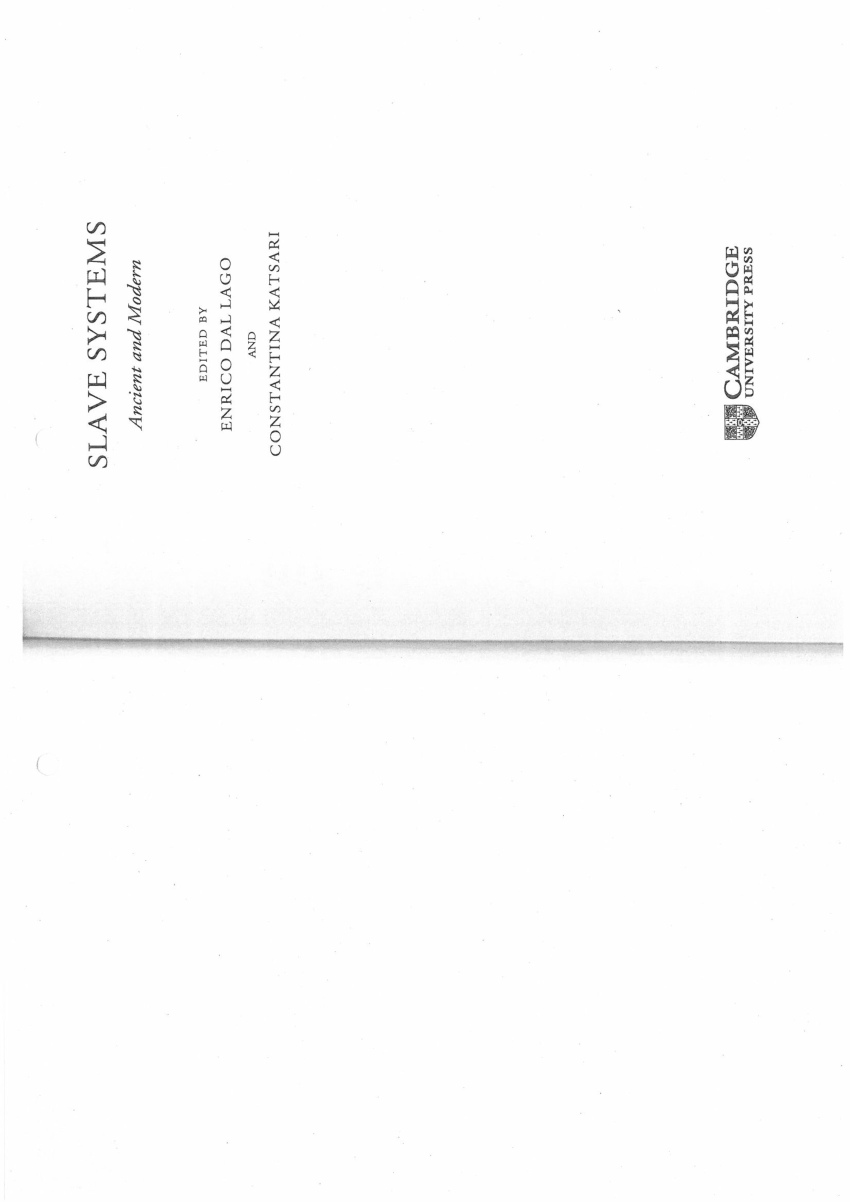 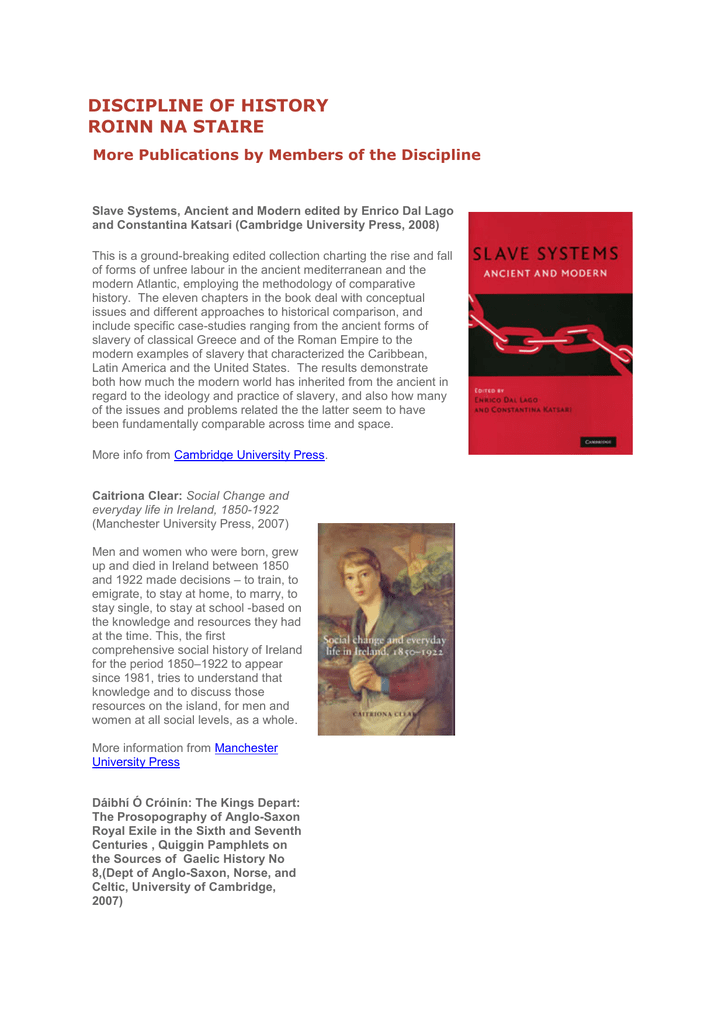 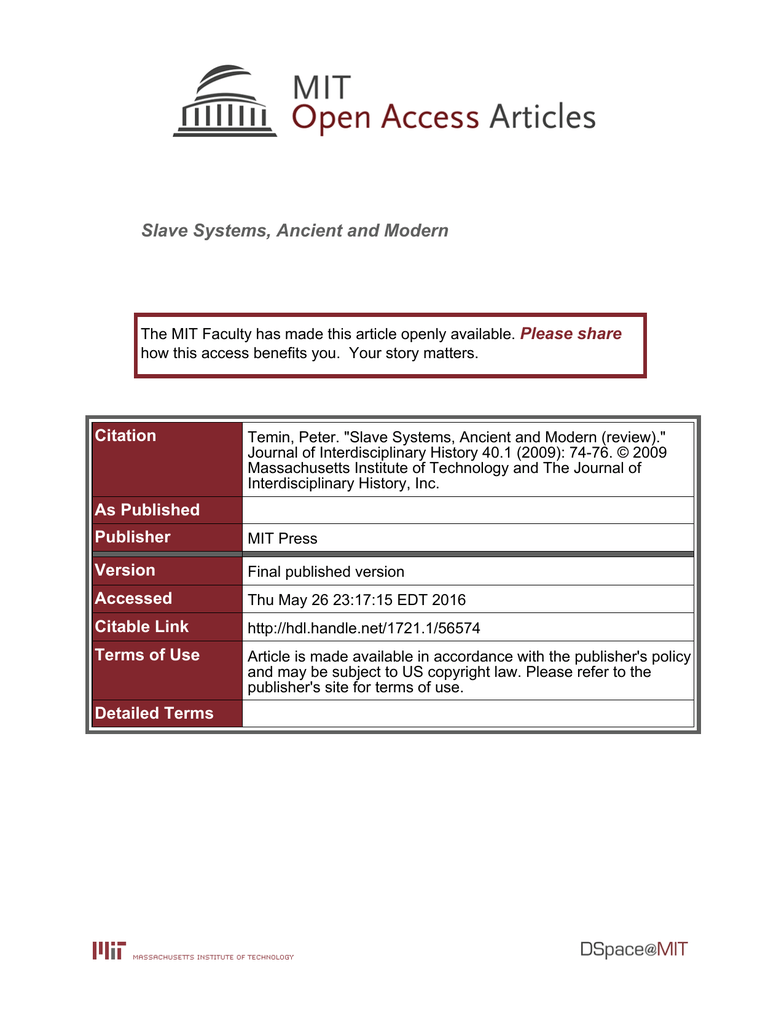